Bill Holman was an old school newspaper cartoonist. His most famous creation was Smokey Stover, one of the longest running gag strips of its kind (1935-1973). And like many popular comic strips, it even had its own comic book. But if that’s not enough for you, how about this: Smokey Stover (and Bill himself) is responsible for the term “foo fighters,” used in World War II as a name for UFOs that Allied pilots saw in the skies. Which was then used as the name for Dave Grohl’s fantastic rock band.

Humble cartoonist Bill Holman, indirectly responsible for the name of one of today’s most popular bands. 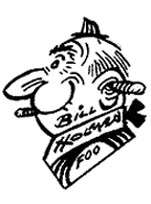