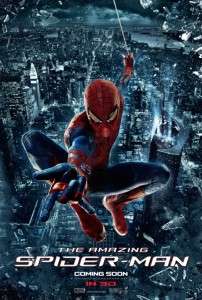 No more Tobey or Kirsten. Now we get Garfield, Stone, Sheen and Fields.

The Amazing Spider-Man is another Spider-Man origin story. But if you think it’s just everything you’ve seen before, you’re wrong. While the component parts are there (an enhanced spider bites Peter, he gains super powers, he builds his web shooters, makes a costume) it takes a different path to get there. The movie actually opens up with a young Peter still with his parents (though they quickly shepard him off to Uncle Ben and Aunt May’s to establish the status quo we’re all familiar with). Though Norman Osborne is connected to Peter early in life, it’s not through a friendship with his son Harry but as former employer of his father, Richard. And though Peter does build his web-shooters, it is using a material that his father developed during his time at Oscorp and that Peter manages to reverse engineer.

But in the end, it’s Spider-Man. It’s a story about a young boy finding himself and losing those that he loves in the process. About learning the value of doing the right thing and what moral responsibility is really all about. And there’s a giant lizard.

Amazing Spider-Man is in theaters now. It also has a companion comic in stores. And for those that need more of a Spider-Man fix, the regular series comes out twice a month at Two Kings Comics.