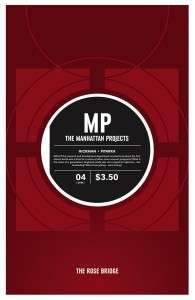 “What if the research and development department created to produce the first atomic bomb was a front for a series of other, more unusual, programs? What if the union of a generation’s brightest minds was not a signal for optimism, but foreboding? What if everything…went wrong?” That is the conceit behind The Manhattan Projects a high concept alt-history sci-fi book that posits that the Manhattan Project (which created the atomic bomb) was merely a front for all kinds of crazy science. Teleportation devices, scientists so irradiated that their radioactive corpse must kept in a containment suit, lest they kill everyone around them. FDR preserved as the first artificial intelligence. And Einstein. Einstein, who is the focus of issue 4, as well as the strange monolithic object that he had been shown staring at in the previous three issues. Einstein who, much like the other characters we have been introduced to so far, is not all that he seems. This is Hickman the way I like him, doing big crazy ideas. And resulting in a very twisted and enjoyable comic.

(Manhattan Projects is still coming out monthly from Image, but Hickman’s other projects like Pax Romana, The Nightly News, and Transhuman are all available for order.)