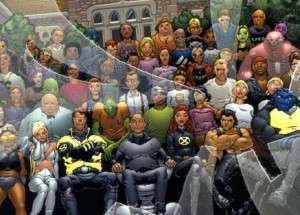 However, the obvious similarities end there.

Morrison developed mutants as an emerging class in the world. With millions of mutants all over the planet they were not a small segregated class but a real power in culture, politics and even business. There were mutant clubs where music and attractions were aimed at teenage mutants and young humans that were infatuated with mutant culture. There were mutant fashion designers, mutant politicians. And in the middle of it all, our favorite mutant renegades, the X-Men.

The series ran for 42 issues with six different artists providing the lovely pictures. And the stories ran the full gamut of the X-Men mythos. From the revelation of Professor X’s previously unknown twin to the return of the Phoenix. From the complete destruction of the mutant nation Genosha to the decimation of the Shi’ar Empire. From the death of long time X-Men foe/ally Magneto to the rising of Quentin Quire, a maniacal angst filled cross between Magneto and Peter Parker.

This is honestly one of my favorite run of X-Men comics (battling it out with its spiritual successor Astonishing X-Men by Joss Whedon and John Cassady) and the ideas that Morrison either created or expanded upon are still being called back to by today’s writers. While Morrison is not afraid to dredge up continuity, be it current at the time or ancient, he presents it is in such a way that a reader unfamiliar with the X-Men’s long history will not be lost. I honestly believe that it is not just a great read for long time X-Men fans but also for those that may be looking to get into the X-Men for the first time. And it is my humble suggestion that one of Morrison’s final X-creations, the White Hot Room, may actually play a part in Marvel’s current Avengers vs. X-Men crossover.