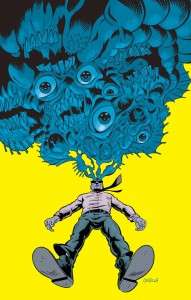 I became a fan of Brian Churilla on BOOM!’s Anchor series. That was a fun little book about an unkillable monk that fights giant monsters and guards the gates of Hell. From the inside, of course. But on Anchor, a series that ended far too soon, Brian was working with the ever talented writer, Phil Hester. In D.B. Cooper Churilla is running the whole show, telling the story of the infamous D. B. Cooper who is most famous for hijacking a jet for $200,000 (when that meant something) and disappeared into the Oregon wilderness. However, in Churilla’s world, Cooper was actually a CIA black ops agent that was carrying out assassinations against Soviet targets by accessing the astral plane, where they appear as horrific giant monsters. And in issue 4, Cooper faces a potential invasion from our collective unconscious. At the same time, he faces the impending threat of his Russian counter part and his own superiors (who believe he is out of control). As you can tell, I’m a bit of a fan.