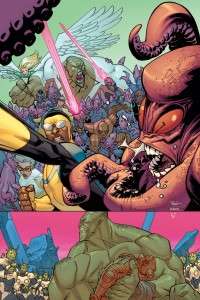 Ninety two issues of Invincible, the little Kirkman superhero comic that could. For those of you that haven’t been along for the ride, Invincible (aka Mark Grayson) is a 20-something alien/human hybrid with your standard flight/super strength/invulnerability powers. After ninety some odd issues of story that included the destruction of Las Vegas, an intergalactic war and attempted genocide, Mark is now temporarily powerless. While he deals with the loss of his identity, Kirkman takes some time to explain what happened while two other characters, Robot and Monster Girl, were trapped in a dimension where time passes slower than in our own. And with Ottley and Walker splitting art duties (Walker doing the flashback scenes while Ottley deals with the present day) this is a treasure of an issue.

For those of you late to the party, Invincible is available in lovely over-sized hardcovers (Ultimate Collections) that get you caught up at 12-14 issues at a time. Also available is the Invincible Compendium that collects issues 1-47 (roughly half the entire series) in one shot.